Canada’s National Ukrainian Festival has been part of Ernie’s life almost as long as he can remember.

The original site of CNUF was in the town of Dauphin. This is where Ernie first encountered the sights, sounds, smells, music and dance of Ukrainian culture. It was to become a lifelong encounter.

Ernie was part of Canada’s National Riding and Dancing Cossacks and Co. for many years, first dancing on the street corners of Dauphin during the parade, to ending his dancing career while dancing with his oldest daughter on the grandstand stage at Selo Ukraina. He, along with his wife Janet, were part of the Festival Choirs’ wedding presentation for many years.

Ernie’s other love, beside his family, is agriculture, and in particular, farming. He continues to farm just west of Dauphin with his family. Throughout his career, Ernie has also been involved in local, provincial and federal organizations, both in and out of agriculture. He was the recipient of the Queen Elizabeth Diamond Jubilee Medal in 2012 for his contribution to agriculture.

Ernie enjoys travel, having been to Ukraine three times. He tries to golf, and cantors at various churches in the Dauphin area.

Ernie is excited to be back as one of the Masters of Ceremonies for this Ukrainian Festival. He promises, as his wife says, to keep it short, and, as his priest insists, to keep it clean. 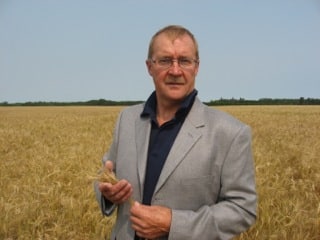